5 Top movies to watch on the Christmas weekend

Remember waking-up during Christmas holidays to a list of movies about Santa, family, friendship and the Christmas cheer? The vibe of innocence, entertainment and happiness they offered was sweeter than a Christmas cake. Even though times have changed, but the charm of such movies still remains the same.

Relive the magic this Christmas weekend with these top five movies.

This is such an uplifting story, offering a lesson which is, never to give up. It is a film that will surely fill your day with so much positivity. This movie is a fictionalized take on how the celebrated English author Charles Dickens (Dan Stevens) came up with his classic work – A Christmas Carol. While Charles is desperately searching for a story idea, he is encountered with a series of strangers, relatives, and friends who inspire him to explore more and write about the miser, old man Ebenezer Scrooge (Christopher Plummer).

The movie expresses all the sentiments of Christmas. And since it is the festive season, it is a perfect time to enjoy a story about compassion, empathy, charity, and generosity. The film takes you back to the classic way of celebrating the festival, which makes it one of our top movies to watch.  Plus, watching Christopher Plummer’s unparalleled acting is a Christmas gift in itself.

The movie is not just a live-action adaptation of the classical Christmas ballet of Tchaikovsky.  It is a visually compelling adaptation that beautifully portrays a tale of adventure and a message about finding true courage. In the movie, Clara, a young girl receives a special gift from her godfather (Morgan Freeman). The gift is an access to a new world which is quite unusual to her own called, the Four Realms. Here Clara meets the brave Nutcracker soldier portrayed by Jayden Fowora-Knight, the Sugar Plum Fairy played by Keira Knightley, Mother Ginger, and many more inspiring characters.

Along with the battle scenes, the film offers tons of takeaways for both – the young and adults. Aspects like courage, perseverance, trusting yourself, and learning from your mistakes perfectly complement the Christmas spirit. The sheer brilliance of the cinematography and plot presentation is this Christmas.

Refreshingly understated, Ben Is Back subverts family drama stereotypes. Now, this may not sound anything like a typical Christmas movie, but offers the audience a story about hope, love, and a new dawn. 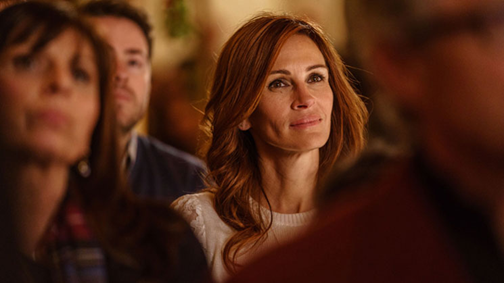 When 19-year-old Ben Burns, played by Lucas Hedges, arrives at his family’s suburban home on Christmas Eve morning, he is welcomed by his mother, Julia Roberts, who is wary of his drug addiction.  However, like all mothers, she is only relieved that her son is home. She still has her reasons to wonder if her son is staying clean. The next 24-hours from the moment Ben comes homes are filled with revelations of truth, a brilliant portrayal of a mother’s undying love and faith in her son, and the length to which she can go to is tested as she does everything in her power to keep him safe. A warm and emotional movie, Ben is Back undoubtedly makes it to our chart of top movies to watch with the family.

The Bachelors follows a mourning father Bill played by J.K Simmons and his son Wes played by Josh Wiggins, trying every way to cope with life one day at a time. But, as real as life can get, Bill can’t help but admit that he misses his wife dearly. Since moving away is the only solution left, Bill takes up a job as a teacher in L.A and Wes transfers there too, as a student. A new place, a new school, a new home, and a new beginning.

The story beautifully portrays the engaging dynamics of how a father and son help each-other to move on. The coming of age of the son and the new things that life has in-store for the father; the story has it all. If you are in for pure entertainment, this movie should be on your top-movies-to-watch list. Although, lacking the Christmas background, this movie is still an excellent watch with family.

This is a new movie compared to others on our list, but caters to an audience that prefers classics. Packed with action, humour, and visual thrills, Captain Marvel is another feather in the cap of Marvel Cinematic Universe’s hat. Centred on their new hero Carol, played by Brie Larson, the story is a beautiful blend of Sci-Fi and drama. It portrays how good conquers evil taking the audience on an action-packed adventure. In the movie, Carol Danvers unfolds the truth about herself while the earth is strangled in a galactic war between two alien races. She is caught in the battle between uncovering who she really is and saving earth from danger.

The story speaks of the courage to stand against evil and strength to protect good in a way that will touch everyone’s heart. A gripping storyline and heart-melting moments make Captain Marvel one of our favourite and top movies to watch during Christmas.

The top movies to watch mentioned in this article are readily available on OSN. Not only does OSN have a plethora of movies, but it also features special family movies for the festive season. Turn your Christmas weekend into an entertaining one with OSN.

How to Enjoy a Birthday Celebration

Which are the essential tips for organising ...